Package financed by reallocation of funds, will not affect S'pore's fiscal position: Wong

More than $2 billion will be set aside to support workers and businesses grappling with the impact of tighter Covid-19 restrictions since May, Finance Minister Lawrence Wong announced yesterday, as he said that the latest period of heightened alert is not expected to derail Singapore's economic recovery.

He acknowledged that the domestic, consumer-facing sectors, such as retail and food and beverage (F&B), will continue to face challenges, but said that Singapore remains on track to achieve growth of 4 per cent to 6 per cent this year.

Mr Wong was giving a statement in Parliament shortly before he introduced the Supplementary Supply Bill to effect the reallocation of funds for the measures.

The latest round of support measures for the current phase two (heightened alert) period was announced by the Ministry of Finance last Friday, and includes rental relief for hawkers and eligible businesses as well as enhanced wage support under the Jobs Support Scheme. It is expected to cost up to $1.1 billion.

This will be financed by the reallocation of funds, in keeping with Singapore's principles of fiscal responsibility and prudence, said Mr Wong.

The bulk of the amount, about $0.9 billion, will come from operating and development expenditures that will not be used owing to delays caused by the pandemic. These are one-off expenditures slated for activities in schools and for construction projects that have been cancelled or postponed.

The remaining amount will be covered by the buffer of $0.2 billion already provided for as part of the supplementary estimates presented early this month. This buffer had been set aside in anticipation of enhancements to or extensions of support measures.

Mr Wong said: "I had said previously that given the stronger position we are in today compared with last year, and the fact that most of the economy remains open, we should not be drawing on past reserves. This remains the case."

He said that since the support package will be funded via reallocation of funds, Singapore's overall fiscal position for Financial Year 2021 is expected to remain unchanged, with an overall deficit of $11 billion, or 2.2 per cent of gross domestic product.

Mr Wong said he recognised that businesses in the affected sectors had been working very hard to adapt to the changing regulations, and are deeply disappointed by the recent turn of events.

But business leaders he spoke to understood the need for the restrictions, and have continued to show resilience and the resolve to ride out the storm.

He noted that last week, he and Trade and Industry Minister Gan Kim Yong met representatives from the Singapore Business Federation and several trade associations from the retail and F&B sectors who said many businesses were facing more strain this time.

"It is not just having to enter into another heightened alert. But it is the broader challenge of having to endure more than 1½ years' worth of restrictions, as well as continued disruptions to their business," he said, adding that the latest round of measures has taken in their feedback.

JSS support will be raised to 60 per cent for sectors - such as F&B, sports, performing arts and arts education - that have to close or suspend most activities.

Support will go up to 40 per cent for those significantly affected by restrictions, such as the retail and tourism sectors, cinema operators and family entertainment centres.

The wage support will taper to 10 per cent as businesses reopen, from Aug 19 to 31.

The Covid-19 Driver Relief Fund will be enhanced for taxi and private-hire car drivers, while a new Market and Hawker Centre Relief Fund will give a one-off $500 cash payout to all individual stallholders of cooked-food and market stalls in centres managed by the National Environment Agency (NEA) or NEA-appointed operators.

To help other workers affected by the tightened curbs, the Government will also make the temporary Covid-19 Recovery Grant available until Aug 31.

These measures come on top of a package announced weeks earlier to cover tighter measures imposed since May. The earlier measures will also be funded by reallocation of funds, some of which will come from capitalisation of development expenditure under the recently passed Significant Infrastructure Government Loan Act.

With about 70 per cent of Singapore's economic activities in outward-oriented sectors, the earlier projected growth of 4 per cent to 6 per cent this year remains on track, as long as external demand remains healthy, said Mr Wong.

He said the bigger uncertainty for recovery is the impact the Delta variant of the coronavirus may have on the major economies in Europe and the United States, which will affect external demand.

He noted that most economists are still projecting a robust global economic recovery this year.

But he said there are growing fears that as countries open up and the Delta variant spreads, the resurgence in cases could lead to more hospitalisations and fatalities, which could force a return to lockdowns and impinge on global economic growth.

"We must continue to stay agile and nimble, and keep on updating our Covid-19 and economic strategies based on the latest developments around us," he said.

"Ultimately, the best way to support our businesses and workers is to bring the infection under control, push up our vaccine coverage and reopen our economy. These continue to be our key priorities."

MPs will debate the statement today. 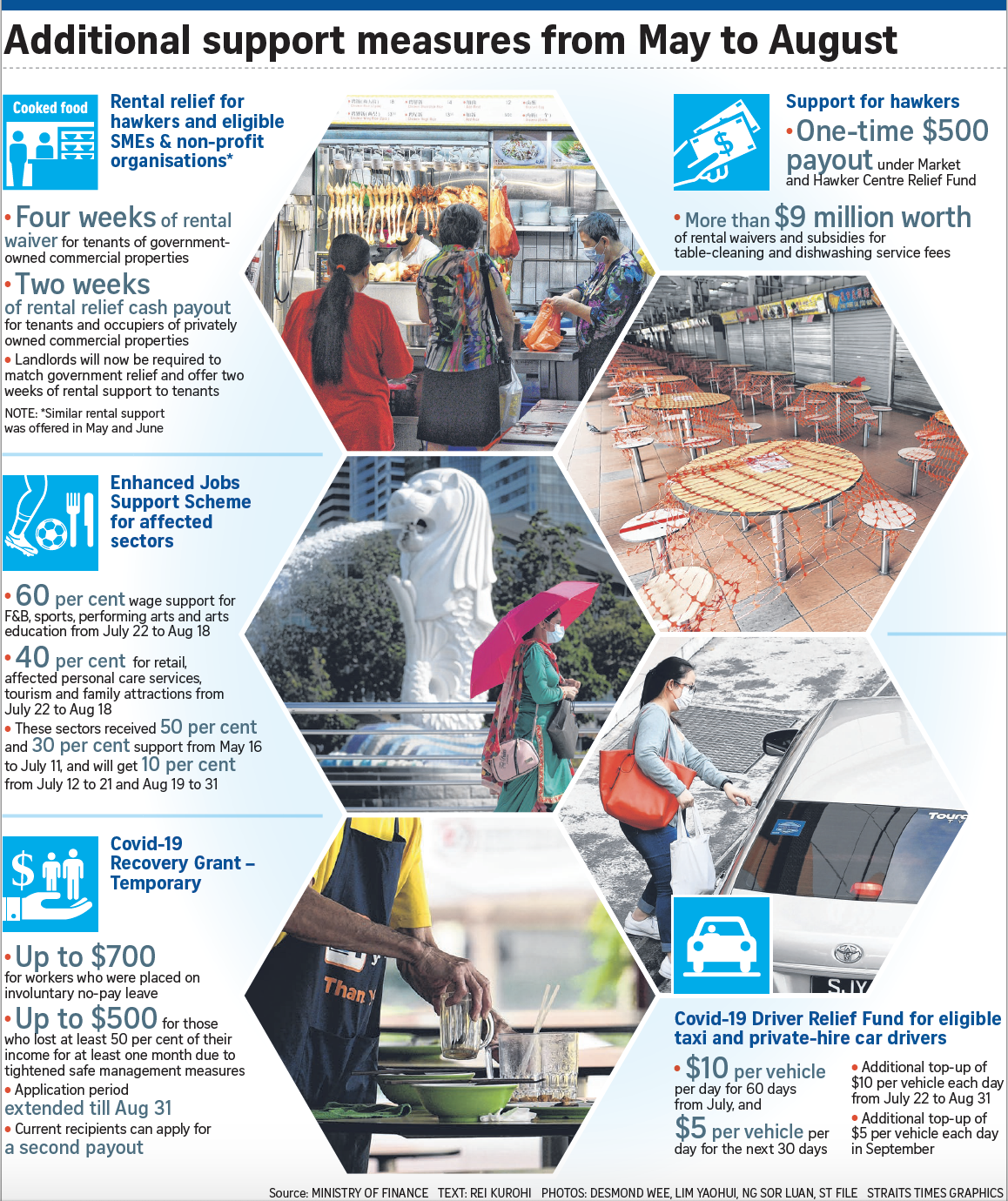